One of the trickiest things for me, as a writer, is figuring out where to begin. I imagine it could be a challenge for students, too. So many decisions to make as you begin… Who is the main character? What does s/he want? What are their obstacles? Secret desires? What is important to her/him? What are they willing to sacrifice to protect what is important?

I have learned to tackle these questions by first taking stock of my personal real estate. By personal real estate, I mean the things that I own, things I know as much if not more about than anyone else. I’m not talking about property or anything that is tangible, but your own personal experiences, personality traits, interests, values, and lessons learned.

A couple of years ago, I was about to take a “Write A Novel In Six Weeks” class at UNCW. I was not sure of what to write about, but I kept rolling ideas around in my head. One morning I awoke with a name in the forefront of my mind, Mango Delight. I thought, what a ridiculous name! I’d feel sorry for a person with a name like that. Of course, with a name like Fracaswell Hyman I automatically empathize with those saddled with a strange name. As we all know, kids can be cruel, especially if there is something different about you that they can latch on to. My name made me stick out like a sore thumb. At the beginning of each school year, I would cringe when the teacher would make several attempts at pronouncing my name while taking attendance. When I would finally raise my hand and offer the correct pronunciation, the giggling would begin. Then the teasing would commence with several amusing distortions of my name, my least favorite (because I was a chunky boy) was “Fat-caswell.” That one stuck for years.

So, it only seemed natural for me to identify with a character with a weird name like Mango Delight. This was territory I knew intimately, hence real estate that I owned. I also decided to make this character a female, since I didn’t want to make the story autobiographical, changing the sex gave me a healthy amount of distance that allowed me the freedom to let my imagination fly and create an original story.

Next up, what does the character want? This is a hugely important step. What a character wants drives your story. I thought back to what it is that I wanted when I was in middle and high school. I remembered that I had friends yes, but no one who would claim me as their best friend. I wanted to have and to be a best friend and was always trying to figure out how to acquire and become one. The chemistry of friendships is complicated and something everyone struggles with at some point in their lives–even as adults.

I had recently lost a very good friend. It was a wound I was still tending, and so I decided to let Mango start off with a bestie, lose that relationship, and then try to find her way to, not necessarily replacing that friend, but gaining some understanding as to what kind of friend she wanted and what kind of friend she wanted to be. Once you know what a character wants, the obstacles will fall into place if you as the writer let yourself become ruthless. Yes, you love and care about your character, but you have to commit to putting him/her through the wringer to get what s/he wants. There is nothing more boring than an easy path to success, at least not when it comes to reading, so keep coming up with as many obstacles as possible and make each one more challenging than the one before.

Giving a character a secret desire and then making it public reveals something that is important to him/her that they can’t easily back away from. As a kid, I always wanted to be an actor. I’d see kid actors on sitcoms or in movies and something inside me knew that I could do that, but I never shared this desire with anyone.

In middle school, I watched from the sidelines as other students auditioned for the school plays, rehearsed and then had their moments in the spotlight during production. Even though my desire was strong, I was too shy to stand up in front of anyone and sing or try to act. I decided to have Mango share the same trait. Her secret desire was to be a singer, something she did well, but never in front of anyone.

In the book, Mango is set up by her ex-bestie to audition for the school play. It is a mortifying moment for Mango, to get up in front of an auditorium full of students and do the thing she’d only do alone in her bathroom. Yes, singing in front of people was just as scary as taking a shower in front of the entire school. So, how to get Mango to not run away and let her ex-bestie’s dirty trick succeed…? I looked into my personality trait real estate and decided to share my stubbornness with Mango. Yes, sometimes being stubborn can get you in a lot of trouble, but at other times it can lead to success. Stubborn folk won’t give up when faced with a dare or a challenge. So, Mango draws on the stubborn side of her personality and sings in public for the first time and it pays off. The payoff leads her to a place outside of her comfort zone, a lead role in a school production.

By the time I got to high school, I found the courage to try out for a school play and was cast in the chorus. It was daunting, but I had found my tribe. Now that my secret passion was public, I happily became a member of a group of kids that shared my interests. They were a great group whose desire led them to staying long hours after school rehearsing, time at home learning lines and songs and dances. These kids were as dedicated to theatrical productions as athletes were to their sports. With no grades or other rewards at the end they committed themselves just for the opportunity to do the thing they loved along with others that shared their passion. Yes, this was a piece of real estate that I knew tons about and I wanted to share how great these kids were, the ups and downs and challenges of learning to perform, and how important it is to follow your dream no matter how scary it can be at first.

Once I was confident in the real estate I shared with my main character, I was free to let my imagination fly and present her with obstacles, predicaments and other characters that would challenge her and make her a character worth rooting for.

At the end of The Wizard of Oz, Dorothy says, and I’m paraphrasing, “If I ever go looking for my heart’s desire again, I won’t have to go farther than my own backyard.” Good advice for when you’re looking to create a fresh new character. Explore your own emotional and experiential real estate; there are treasures to be found if you dig deep enough. 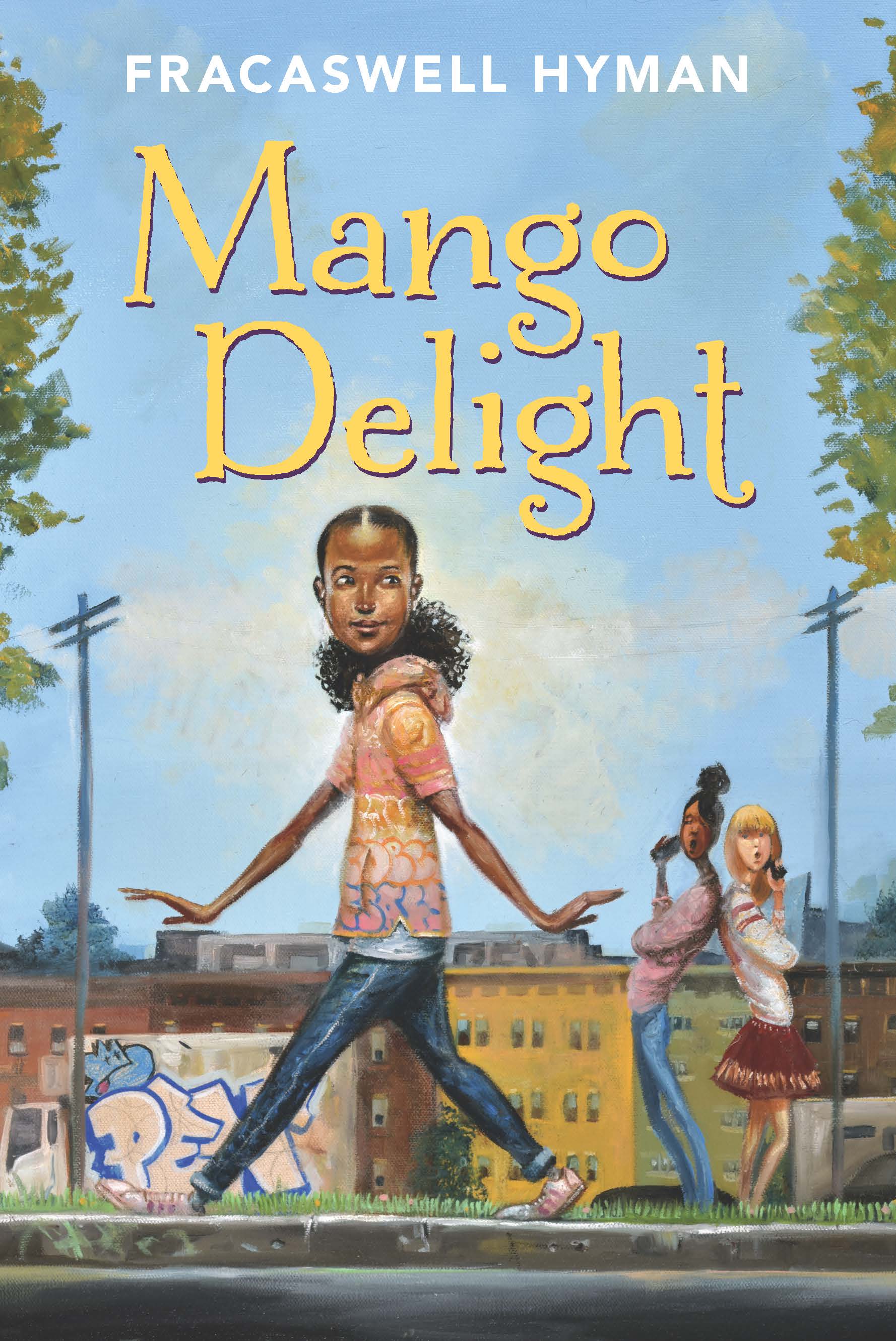 What happens when your BFF becomes your EFF . . . EX-Friend-Forever?
When seventh-grader Mango Delight Fuller accidentally breaks her BFF Brooklyn’s new cell phone, her life falls apart. She loses her friends and her spot on the track team, and even costs her father his job as a chef. But Brooklyn’s planned revenge—sneakily signing up Mango to audition for the school musical—backfires when Mango not only wins the lead role, but becomes a YouTube sensation and attracts the attention of the school’s queen bee, Hailey Jo. Hailey Jo is from a VERY wealthy family, and expects everyone to do her bidding. Soon Mango finds herself forced to make tough choices about the kind of friend she wants to have . . . and, just as important, the kind of friend she wants to be.

*“Hyman marries traditional tween elements with a fresh and original plot, and his multicultural cast sparkles with individuality and authenticity. . . . Hyman’s supporting characters, both kids and adults, are vivid and dynamic. Mango is as delightful as her middle name indicates, and middle-grade readers will easily recognize their own experiences in her friendship struggles. This is Hyman’s first novel; here’s hoping it’s not his last.” —Booklist (Starred review)

“[T]he characters . . .  are deftly crafted, and their relationships play out in ways that carefully avoid cliché. . . . Mango’s supportive family is also well drawn, particularly her comforting Jamaican immigrant father and her no-nonsense, former athlete African-American mom, who’s a loving but demanding figure. Kids who’d settle for making it through middle school unscathed but still dream of shining in it will find a kindred spirit in Mango.” — Bulletin of the Center for Children’s Books

Thank you to Ardi for connecting us with Fracaswell!