The Real-Life Power of Genies

My middle-grade novels, Eden’s Wish and Eden’s Escape, tell the adventures of a twelve-year-old genie who comes to live on Earth. Like many authors, I make frequent visits to schools to speak to students about my books. When I’m there, I often ask what the students would wish for if they were to meet a genie. I’ve learned that, fictional though they may be, genies possess a very real special power: they are gatekeepers to the imagination.

Once they start talking about their wishes, even the quietest groups of students open up. They hear one another’s responses and change their own to make their wishes bigger, grander, or more refined. They’re bursting with thoughts and ideas as they engage and collaborate with one another. Sometimes, the teacher has to pump the brakes and set them back on course. And the way I see it, that’s a wonderful thing! I’d like to point out two valuable ways that teachers can make use of the three wishes fantasy and the response that it elicits.

First, there’s the creative momentum. When students imagine what their three wishes would be, they remove limitations of what’s possible or feasible, and their imaginations run wild. Why not use this as a launching pad for them to write stories? They can write about meeting a genie and making their wishes, and explain whether they received what they had in mind. Or they can write about wishes gone wrong, where a tricky genie like Eden doesn’t give them exactly what they had in mind. Or, there are the inevitable adventures after they receive—or don’t receive—what they’ve wished for. You can also encourage students to view things from the genie’s perspective. Would the student like to be a genie? Why or why not? There are so many possibilities, and writing these stories is exciting for students because the starting point is whatever their greatest fantasy might be.

The second valuable aspect here is that the teacher receives insight as to what’s going on in students’ minds. When someone shares what their wishes would be, they’re providing a glimpse into their dreams and desires. They might reveal mindsets and thoughts that wouldn’t have been exposed otherwise. For instance, once I was speaking to a classroom of fifth-grade girls who were telling me what they’d wish for. Nearly every girl expressed a desire to change something about the way she looked. It broke my heart, but it also drew attention to a problem that needed to be addressed. The school’s guidance counselor was in the room with us, and after hearing their responses, she told me it was clear that they needed to add a unit on loving yourself the way you are to their curriculum.

Stories are powerful, and there are always opportunities to use them in positive ways. I believe that the classic wish-fulfillment premise can motivate students to turn their dreams and fantasies into stories, and can also reveal what those fantasies are so that the teacher can nurture students’ minds more effectively. Genies may not be real, but they can have real power in the classroom. 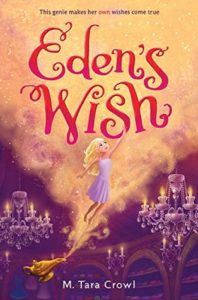 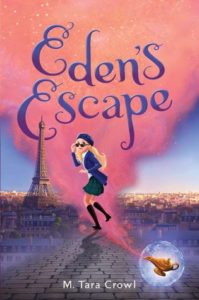 All twelve years of Eden’s life have been spent in an antique oil lamp. She lives like a princess inside her tiny, luxurious home; but to Eden, the lamp is nothing but a prison. She hates being a genie. All she wants, more than anything, is freedom.

When Eden finds a gateway to Earth within the lamp, she takes her chance and enters the world she loves. And this time, she won’t be sent back after three wishes.

Posing as the new kid at a California middle school, Eden revels in all of Earth’s pleasures–but quickly learns that this world isn’t as perfect as she always thought it was. Eden soon finds herself in the middle of a centuries-old conflict between powerful immortals. A ruthless organization run by a former genie will stop at nothing to acquire the lamp and its power–even hurt Tyler and Sasha, the new mortal friends who have given Eden a home. To save her friends and protect the lamp’s magic, Eden must decide once and for all where she belongs.

Eden’s new life on earth begins in New York City under the guidance of her new guardian: Pepper, a petite, bubbly genie alum who’s also a Broadway actress. Before she has a chance to settle in, though, Eden is whisked away for a granting–only to find herself trapped in a laboratory. David Brightly, owner of the world’s leading tech company, cares more about tapping into the lamp’s power than making a wish and starts performing tests on Eden. With Brightly’s plasma shield around the lamp, Eden has no way home. Left without a choice, she escapes the lab and goes on the run. After her daring exit, Eden finds herself on the streets of Paris–home to Electra’s headquarters. Left in a strange city with a price on her head (courtesy of scheming Brightly), Eden has to keep her wits about her. She dons a chic disguise and flits around Paris incognito, investigating Brightly Tech. Assisted by Pepper and her old adversary Bola, as well as some new friends, Eden embarks on a quest to retrieve the lamp and protect the secrets of the genie legacy.

“Middle grade readers will enjoy the children’s autonomy and Eden’s humorous difficulties in grasping how school works…Hand this to readers who like their magical fantasy combined with middle school drama.” ―School Library Journal

“An imaginative romp with a smart, snarky protagonist and a humorous interpretation of the world as we know it…[Eden] is also just plain entertaining, with a sassy attitude and a clever wit that saves her on more than one occasion.” ―BCCB

Tara Crowl grew up in Murfreesboro, Tennessee. She studied Cinematic Arts at the University of Southern California, then received an MA in Creative Writing at Macquarie University in Sydney, Australia. She lives in New York City.

Stories are powerful, and we can find all sorts of dreams within them! Thank you Tara for your post!