A few years ago, I visited a fifth grade classroom after a long week of state testing. The students were still grumbling, particularly about the writing test, which was new that year in Virginia. They’d spent weeks practicing various writing prompts. But some of them still got stuck.

“Writer’s block,” one of them told me. I’d seen the same expression on my daughter’s face after a recent soccer loss. I hated to think the kids felt like they were losing at writing, too.

But there was good news: If they had writer’s block, that meant they were thinking of themselves as writers. The bad news, of course, is that thinking like a writer didn’t help with the stuck part. I spent part of my time in the classroom talking about the games professional writers sometimes play when they’re stuck, too. It wouldn’t help with that year’s school testing. But maybe it would help loosen the students up when they received classroom writing prompts in the years ahead. I’m listing some of my writing games here, in the hopes they’ll be of help in other classrooms as well.
Game 1: Fortunately/Unfortunately
In this game, I start out with a simple prompt, usually based on the classroom teacher: “Mrs. Wohlford walked into the classroom carrying a giant box.”
Then I walk around the room, tapping heads like we’re playing Duck, Duck, Goose.
“Unfortunately,” I say, tapping Head No. 1.
The kid in the Minecraft shirt, picks up the story. “Unfortunately the box was full of snakes.”
I touch another head. “Fortunately.”
“Fortunately the snakes weren’t poisonous,” says a girl with a Katniss braid.
I touch the shoulder of the girl sitting next to her. “Unfortunately…” I begin.
“… one of them was,” she finishes.
By the time we make it around the classroom, poor Mrs. Wohlford has died and been resuscitated about six times. I make sure to end on a “fortunately.”
My son’s friend Patrick, who has played this game with us a few times, says it reminds him of the Direct TV commercials (https://www.youtube.com/watch?v=NZ80SVOHKoo). Except in the Direct TV commercials, they don’t live happily ever after.
Game 2: What if?
I ask myself this when I’m not satisfied with a plot point. And then I ask myself again. And again. And again. I ask until I have a situation that will move my story onward and upward.
In the classroom, I give the kids a scenario. “The fifth graders were sitting quietly at their desks, just before lunch. What if?”
Hands pop up like popcorn.
“What if they heard a rumble and aliens landed on the roof?”
“What if an earthquake split the classroom in two?”
“What if  a dinosaur broke loose from the Smithsonian and grew flesh and stuff and started charging toward the school.”
Admittedly in this game, we are often dealing with an elementary school version of the apocalypse. But there’s plenty of laughter, too.
Game 3: Take a walk.
This isn’t a game so much as an activity, but take a walk. When I have true writer’s block, nothing unblocks me more quickly than changing the scenery and going for a walk outside. A walk outside with your students might be a great way to unstick them, too. And it’s also something they can do if they get stuck in their writing at home.
If you’re unable to walk, due to time constraints or weather, try suggesting a change of scenery in the writing prompt itself. Have the students move their character outside, to a park, to the mountains, to the sea.
Game 4: Reverse the order.
Stuck on a beginning? Have the students start in the middle or at the end. Sometimes, initial writing directions can be intimidating: Write five paragraphs, use complete sentences, don’t forget your summary sentence, etc. It’s not as daunting if you plunge in, kind of like jumping off the diving board without testing the water.
Once you’re in, you’re in deep.
Game 5: Add an elephant.
When students get stuck, have them add an extra ingredient that can change the plot, even if it doesn’t make total sense. There’s a lot that can happen when an elephant lumbers into the cafeteria.
Or better yet, keep a jar full of types of animals, planets, natural disasters, and methods of time travel on your desk. When the kids get stuck, let them pluck something from the jar to add into their story. Bonus activity: Have the kids fill the jar themselves–their own arsenal of writer’s block busters.
Game 6: Pass it on.
Remember the Exquisite Corpse game you used to play as a kid? Someone draws the head, then folds the paper and you draw the middle, and then you fold the paper and pass it to a friend for the legs? This works the same way, except with a story.
Students split into groups of three. They can each write a beginning, and then pass the story around so a different student writes the middle and a third student writes the end. They can do it completely blind, to make a nonsense story. Or they can do it reading one line from the section above. Either way, the results are always fun. And that’s exactly how we want students to think of writing.
About the Author:
Madelyn Rosenberg is the author of eight books for kids of all ages. Her most recent books include Nanny X Returns and How to Behave at a Dog Show. Visit her online at www.madelynrosenberg.com or @madrosenberg.

How to Behave at a Dog Show 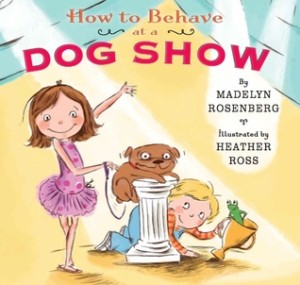 In How to Behave at a Dog Show, a picture book written by me and illustrated by Heather Ross, Julia and Charles learn that Rexie is not exactly Best-in-Show material. But he IS best at lots of other things. We’re hoping readers will see what’s best in their own pets, and in themselves. This book can be used in classrooms as a mentor text (How to Behave at a Tea Party is also in the series and kids could easily discuss how to do anything!) I also have a guide for how to host a classroom pet show. I’m attaching the link for that here, along with the link for the book trailer my son made for me. Teacher’s Guide 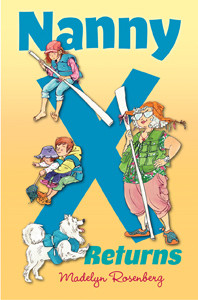 Nanny X Returns is a middle-grade novel. The first book in the series, Nanny X, has found favor among reluctant readers and I’m hoping this book will, too. The first Nanny X is a finalist for the Land of Enchantment Book Award. The follow-up chases Nanny X and her young charges around Washington, D.C., as they attempt to save our national treasures from someone named The Angler, who wants a statue of a fish installed on the White House lawn. I’m enclosing a discussion guide that can be used in classrooms. Teacher’s Guide

Thank you to Madelyn for these fantastic games and activities to battle writer’s block!