“Why We Still Need Coming Out Stories in YA Fiction”

A friend of mine recently complained that the LGBT literary market seems to be dominated by coming out stories. “Why do all the gay stories have to be about people coming to terms with their sexual identity?” she asked. This focus is limiting and narrow, she argues.

I have seen this sentiment in many Goodreads reviews of LGBT stories, too, ya fiction included. And I see the point. I do. It is based in the argument that as much as we need diversity in the kinds of people we tell stories about, we also need diversity in the kinds of stories we tell about them. In this modern and increasingly tolerant world there should now be a place for books where the sexuality of gay characters need not be the focus of the story, but simply an element of character.

Sure, that sounds great, but coming from the perspective of someone who both teaches and writes for young people, I would argue (and did) that coming out narratives still have a vital role in the realm of ya fiction. And it doesn’t surprise me that those arguing for less focus on coming out stories on Goodreads are often adult readers and reviewers of ya fiction, not the primary audience.

I think we’d be pretty misguided to think we are living in a world so progressive that stories about realizing your sexuality aren’t still vital for young people who are in the process of discovering who they are. Because that’s growing up, isn’t it? It’s the experience of becoming yourself in the world. And it is a time when questions of your sexual identity have suddenly become psychologically and hormonally urgent.

Coming out stories give ya readers an opportunity to see how other young people negotiate these uncertain terrains, and to give perspective to an experience they are going through. And as anyone who has been through the war zone that is puberty can attest, it’s hard enough to go through the uncertainty of adolescence. But it’s even harder to discover you are different from most of those around you. And if you are gay, that is statistically likely to be the case. And difference, sadly, must always be made known, and it is always there to be noticed.

As a young gay person, you are asked to recognise and announce yourself in terms of your difference from others, and at a time of life when there is so much pressure to socially conform. For some this is difficult and stories about negotiating and surviving these pressures are vital. For example, in Kelly Quindlen’s Her Name in the Sky, Hanna and Baker both try to ignore their feelings for each other in order to conform to their religious and heteronormative environment, but ultimately realise they cannot. They slowly discover they do not need to fit into tightly prescribed social categories to be accepted and happy.

Coming out is also a jarringly public process. Few heterosexual girls will ever have to announce, ‘Hey, I’ve decided I want to make out with boys!’ In fact, it’s expected. But if it’s a teenage boy, he’s probably going to have to say it out aloud at least once. For some young people, the scrutiny this declaration invites can be awkward. For example, in A Story of Now, Mia is not uncomfortable about realising she is gay, but with the fact that her newfound identity is something she must announce to the world, rendering her private life immediately public.

Another point where I think my friend has really missed the importance of coming out stories is that coming out is as much about coming out to yourself as it is to the world. Coming out is also about a person figuring out who they mean when they say ‘I’, and where this places them in the world.

For some young gay people, accepting and embracing their sexual identity can be the most difficult part of coming out. A perfect example of a story that sympathetically depicts this struggle is A.S. King’s Ask the Passengers. For the reader, it might seem like the job of coming out is half-done at the start of the novel: Astrid has a girlfriend and she has gay friends. But Astrid is not yet ready to accept who she might be. And while everyone around her tries to push her toward certainty, she stubbornly takes her own sweet time to come to terms with her sexual identity.

How can books that shows readers how negotiate these experiences not just be good, but be necessary? George Gerbner describes storytelling as the process that makes us recognize ourselves. And as ya writers it remains our responsibility to pass down the kind of stories where young people have the opportunity to think, ‘Hey I feel like that too.’ We do this so they can recognize themselves at a crucial time in their lives. It. So I am sorry, my friend, you are wrong. There is one domain at least where coming out stories are still sorely needed. 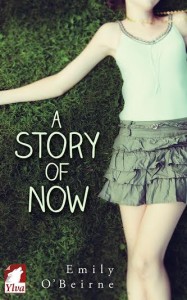 A Story of Now

About the Book: Nineteen-year-old Claire Pearson knows she needs a life. And some new friends. But brittle, beautiful, and just a little bit too sassy for her own good sometimes, she no longer makes friends easily. And she has no clue where to start on the whole finding a life front, either. Not after a confidence-shattering year dogged by bad break-ups, friends who have become strangers, and her constant failure to meet her parents sky-high expectations.

When Robbie and Mia walk into Claire’s work they seem the least likely people to help her find a life. But despite Claire’s initial attempts to alienate them, an unexpected new friendship develops.

And it’s the warm, brilliant Mia who seems to get Claire like no one has before. Soon, Claire begins to question her feelings for her new friend.

Author’s Note: The characters are university aged and thus the story contains elements like drinking and mild sexual content.

Thank you so much to Emily for allowing us to host this giveaway and for writing about something we genuinely believe in.