I really had no concept of what a reluctant reader was until my daughter started reading. My son is exactly like me and will devour books without blinking. My daughter? Not so much. Getting her to read past the first few pages in a book is like pulling teeth. As a writer, this has been more than frustrating.

Being a concerned father, I asked her questions about why she’d start a book, but never finish it. I asked lots of questions. Yet no matter the question I always received the same answer (or a version of the same answer).

Huh. Boring? The characters? The plot? The story? The cover? What was boring?

This troubled me. That bit of fear in the back of my head was that maybe she had a learning disability. Of course, the Voice of Reason spoke up and said, “She’s just a reluctant reader.”

That voice was my wife’s. I say she was the voice of reason not because of some ingrained, antiquated notion of gender roles within the household, but because my wife is an elementary school teacher with nearly two decades of experience, a master’s degree, several certifications in various subjects, and is a reluctant reader herself.

That’s a voice of reason, folks.

To grab a reluctant reader’s attention you need relatable characters, you need fast pacing with short chapters, you need the prose to be clear and interesting, you need to give them a reason to keep reading. This is basically what all good writers strive for anyway. But the big difference is you can’t slack. One misstep and that book is down and forgotten.

In my research on reluctant readers I found out that the make or break age is 8-12. Those are the ages where so many kids decide whether or not reading for fun and pleasure is their thing. It just so happened I was writing a series of scifi/horror books aimed at middle grade ages. That 8-12 year old danger spot. No pressure, right?

So, I decided to do what I do best: write six books that packed as much non-stop action and suspense into them as I could get away with while considering my target age group.

I went with the classic serial structure of one book ending on a cliff hanger and the next picking it up right from that exact same spot. I also wrote each book as told from a different character’s point of view. This made sure that no matter what gender or race my young readers turned out to be, there would be a character, and a specific book in the series, that they could personally relate to. I put the characters into an impossible situation of being alone on a space ship in deep, deep space without parents around, all of them having to band together and fend for their themselves.

Then I set things in motion.

Writing action isn’t hard. You just keep things moving. The trick is to keep things interesting. Constant running does not always make for great story. That’s where the suspense comes in. And you only have so much time for suspense before boredom kicks in. It’s a delicate dance.

I began each book with some explanation of the situation the children were in. For this series, a giant asteroid outfitted for deep space travel and human habitation so people could find a new home in the universe after Earth has been polluted beyond repair. Explanation done, I immediately moved to danger. Got to have danger to motivate the characters into action. Once danger was established, and the characters were active, I threw in roadblocks.

Roadblocks are key to good action. The reader, and especially a reluctant reader, will get bored if the action just goes from point A to point Z. You need to send them off into tangents. You have to destroy points B, C, and D so the characters are forced to figure out how to skip to point E directly. Give those characters roadblocks and the action becomes believable, no matter how fantastical. And believable is another key to keeping a reluctant reader’s attention.

That’s where I got to sneak in the suspense. My story revolved around a mystery. And not just a mystery of why all the danger and chaos was happening to these characters. I introduced a new character. One that should have been a danger sign immediately in any “normal” situation. Is that suspense?

You bet it is. Who is this new entity? Where did it come from? What is its motivation? If the characters trust it will they regret it later?

To complete my formula (and for middle grade I needed a formula) I twisted the action and the suspense together, intertwining them in a narrative that would continually keep the readers off balance, afraid, excited, interested, and engaged. I wove the suspense within the action so that the story was layered in a way to keep reluctant readers from drifting off. I did my job as a writer and made it impossible for them to stop reading without stopping in the middle of an action scene or a bug reveal in the plot.

Or that was my goal, at least.

Well, my reluctant reader of a daughter didn’t put the manuscripts down.

Whether the books are received well out in the world or not, I count that as a success. No question there. 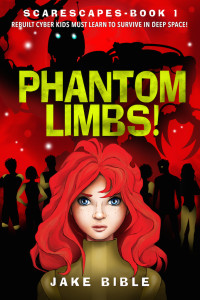 About the Book: On the Earth Colony Asteroid Scorpio, something has gone terribly wrong. Millions of light years off course and 900 years late, the ship’s AIs wake up only seven kids, leaving the adults stuck in cryosleep! Damaged from the long journey, the AIs must repair the awakened seven with the only thing available–cybernetic robot parts.

Along with learning to function with new cyber parts, the all-kid crew must unravel the mystery of what went wrong with the Scorpio. As if the nightmare of deep space isn’t enough, the kids soon find themselves battling the ship’s maintenance robots while their cyber parts begin taking on a life of their own!

Scarescapes: Phantom Limbs! is the first book in the middle-grade YA series Scarescapes series by Bram Stoker Award nominated author Jake Bible. The ebooks are $2.99 and are available at Amazon, Barnes and Noble, Smashwords, Google Play, and Kobo. Paperback copies will follow later this year. 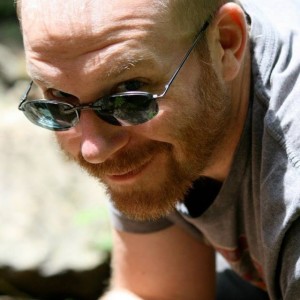 About the Author: Jake Bible lives in Asheville, NC with his wife and two kids. Novelist, short story writer, independent screenwriter, podcaster, and inventor of the Drabble Novel, Jake is able to switch between or mash-up genres with ease to create new and exciting storyscapes that have captivated and built an audience of thousands. He is the author of the Young Adult horror novels Little Dead Man and Intentional Haunting, as well as the best selling adult horror series Z-Burbia and adult thriller/adventure series, Mega. Find him at jakebible.com. Join him on Twitter and Facebook.

Thank you to Hannah at Permuted Press for connecting us with Jake!