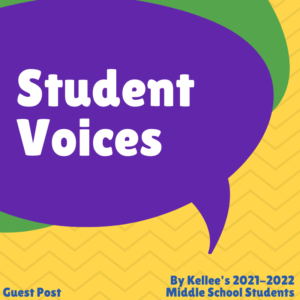 Ten Characters I Would Like to Meet by Ana T., 7th grade

I want to meet her because I look up to her. I would love to be friends with her, and she is such a hard worker. I would also love to use her time travel necklace.

I want to meet him because he is so funny on the books, and and he’s such a good friend; I would love to be friends with him <3

♡ Prince Maxon from The Selection

I would like to meet him because I feel like he would be funny, and he’s such a good person too, so I would love to meet him!

I would like to meet him because he’s really funny in the book, and I feel like he would be really sarcastic but like the funny kind.

I would love to meet him because he’s so sweet, and I feel like if I meet him we would be funny.

Alice is my favorite twilight character. She is so sweet, loyal, and honest!

♡ Alosa Kalligan from Daughter of the Pirate King

Alosa is a strong woman, and she is really independent and smart, so I would like to meet her.

This was one of the first books I’ve read when I first came here, so I would definitely like to meet her!

When people think of heroes, they probably think of Percy Jackson, or Harry Potter. These heroes are heroes, that is true, but today I am going to write about underrated heroes from books that aren’t as popular or common but should still be recognized.

Here are my favorite book villains of all time.

Villain – a character whose evil actions or motives are important to the plot.

Villains can come in many shapes and sizes, backgrounds and pasts, but sometimes the villains of a story, or even in real life, are not always portrayed as villains. Here are some book characters that turned out to be the true villains in a story.

I was inspired to write this blog because of another blog post called “Focus on Villains by Diego, Luis, Elsa, Kaley, Max, Mariana, & Daniela”. Thank you for reading, and I hope you enjoyed reading this blog post.

One Character I Like and One I Don’t by Gabriela C., 7th grade

Thank you so much to my student voices today and their look at characters!