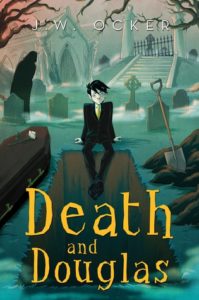 Summary: Douglas has grown up around the business of death.

Generations of his family have run the Mortimer Family Funeral Home. The mortician and gravediggers are all his buddies. And the display room of caskets is an awesome place for hide and seek. It’s business as usual in Douglas’s small New England town.

Until one day an incredibly out of the ordinary murder victim is brought to the funeral home. And more startling: others follow. On the cusp of Halloween, a serial killer has arrived. And unsatisfied with the small-town investigation, Douglas enlists his friends to help him solve the mystery.

With sumptuous descriptions of a bucolic town and its quirky people, fascinating yet middle grade–appropriate insider information about the funeral process, and a crackling mystery with a heart-pounding conclusion—Death and Douglas has something for readers young and old. 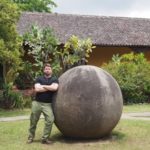 About the Author: J. W. Ocker is the Edgar Award–winning author of Poe-Land: The Hallowed Haunts of Edgar Allan Poe. His work has appeared in Rue Morgue magazine, the Boston Globe, CNN, the Atlantic, and other places people stick writing. He’s from Maryland but has lived in New Hampshire since 2008. This is his first book for children.

“Ocker populates his eerie New England town with a memorable cast, and gives us a compelling hero in Douglas Mortimer. Kids and coffee-drinkers beware!” —Patrick Moody, author of The Gravedigger’s Son

“With the perfect balance of macabre and mystery, the ideal combination of horror and humor, the Ghastlies are bringing plenty of goosebumps and giggles for everyone!” —Brooks Benjamin, author of My Seventh Grade Life in Tights

Review: To be honest, I didn’t know what I was getting myself into when I started this book because it is way creepier than I thought it was going to be, but a serial killer on the loose in a town definitely will add that creep factor to any book.

Douglas is definitely well-rounded and mature when it comes to death, it has been around him his entire life, but all death he’s encountered has been natural or an accident until now. This is an interesting point of view for a character as I’ve never read a middle grade book with a character like Douglas. All of a sudden, a young boy who never feared death realizes that there is evil in some deaths and that scares him more than it may scare most because it is a new realization. This definitely adds to the suspense because Douglas is not only questioning everything around him but also on the look out for a serial killer, so all bumps in the night are a reason to jump.

I will also say that the conclusion was not what I saw coming!

Side note: Douglas and his friends did some DANGEROUS things, and I know that we have to suspend our belief when reading, but the whole time as an adult I wanted to yell at them for being so ridiculously careless in their safety by searching for a serial killer! Kids: Do not do that at home!

Teachers’ Tools for Navigation: My students are always asking me for mystery books or horror books, and they are so hard to come by in middle school; however, this one will be perfect for them! Death and Douglas belongs in libraries of any kind!

Flagged Passages: “Maybe Lowell’s crazy plan was worth going along with, for a little while at least. Despite the terrors of teh night, both old and new, Douglas found himself comfortably lost in his own thoughts.

Until the dogwoods spoke to him.

Somewhere behind the ordered row of trunks, a short hiss of words seemed to connect the space behind him and them. They sounded hollow, inhuman, almost breaths.

Ran like he’d never run in gym class, like no game of tag he’d ever played in the cemetery. Cold terror is the best fuel for the body.

Douglas didn’t dare look back. Didn’t even dare try to use the cane, which suddenly seemed silly in his hands. His breath came out ragged, and his feed slapped the ground even harder as he raced across the street to the front lawn of the funeral home. As he ran, he thought he could hear echoes of those sounds behind him. So close behind.

He ran even faster.

The night silhouette of the funeral home loomed above him–a scary place for some, a safe harbor for him.” (Chapter 11)

Read This If You Love: Murder mysteries or any mysteries!

**Thank you to Sky Horse for providing a copy for review!**