Thank you, Kim, for telling us about your new series!

Tell us about the GAMER SQUAD series.

GAMER SQUAD is three-book series about a group of gamer kids who have to save their town from mobile game related disasters. The books have humor and heart, encourage girls in STEM, and focus on a love for community. I had so much fun writing them!

Your main character, Bex, is a gamer girl and wants to be a programmer when she grows up. Do you have any of this in your background?

Yes! I’ve been playing computer games since I got my first TI-99 and Commodore 64 (really dating myself here-ha!). At Bex’s age, I enjoyed playing around with some light programming at home in BASIC. Like Bex, I was self-taught. In high school, I took Pascal. And my first job out of college was programming for the IBM AS/400. But I have no idea how to program apps, which is Bex’s interest. So I had to get some help with that when it became a plot point in the second book.

In addition to the gaming and action, are there any themes you touch upon in the books?

Middle school can be a rough time for a lot of kids (it was for me), and I include a lot of these issues across the three books—from first crushes to bullying, losing and gaining friendships. It’s also a time where kids are trying to figure out who they are and who they want to be. Due to some changes in Charlie’s life, a big theme of the second book is that you don’t have to put yourself in a box and be one thing. And this stems from me growing up with vastly different interests. I was a huge reader and writer but also loved gaming and programming. It seemed unusual at that age to be in both Creative Writing and Programming for Pascal, but you don’t have to commit to one interest or label yourself.

What was your favorite part of researching for the series?

The obvious answer would be playing games! But it’s actually something else. In book two, CLOSE ENCOUNTERS OF THE NERD KIND, the kids go on a field trip to an observatory. When they play their mobile game too close to a radio telescope, they accidentally summon real aliens to town. I knew I wanted the observatory scenes to be as realistic as possible so I actually toured an observatory. It was a blast! Their telescope was amazing, and we got to see a star, a nebula, and incredible details of the moon.

What’s happening next in the series?

After the Gamer Squad saves the town from not-so-virtual monsters in book one and aliens in book two, they find themselves up against the biggest challenge of all. In book three, APP OF THE LIVING DEAD (coming October 3rd), the kids must save their town from zombies and the game development company that has been causing all this trouble. 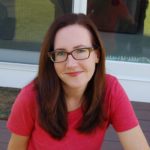 Kim Harrington is the author of Clarity, Perception, The Dead and Buried, and Forget Me for teens and the Sleuth or Dare and Gamer Squad series for kids. She lives in Massachusetts with her husband and son. When not writing, she’s most likely reading, watching one of her favorite TV shows, or fantasizing about her next vacation. She can be found on Twitter (@Kim_Harrington), Instagram (@KimHarringtonAuthor) and on her website: www.kimharringtonbooks.com. 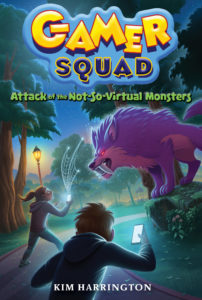 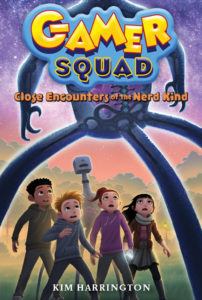 What happens when your cool virtual-reality game . . . becomes REAL?

Pokémon GO meets The Goonies in this action-packed middle-grade series.

Monsters Unleashed—where you catch virtual-reality monsters on your cellphone—is one of the hottest mobile games around, and Bex and Charlie just can’t stop playing. They even check out an old map in Charlie’s grandfather’s attic in hopes of discovering some forgotten places in town where the rarest monsters might hide. But they find a strange machine up there too, and after Charlie switches it on, the WiFi goes down . . . and Bex’s entire catalog of monsters vanishes! And that’s not the worst of it: all the creatures she’s collected on her phone escape into the real world. Can the friends nab the beasts before they become monster lunch?

First they took on monsters. Now they have to face ALIENS.

Come join Bex and Charlie on their second thrilling adventure in the GAMER SQUAD series!

After their scary adventure, Bex and Charlie have sworn never to play Monsters Unleashed again. Then Veratrum Games Corp releases a new augmented reality game featuring aliens instead of monsters, and the best friends just can’t resist. After all, everyone loves it, even their science teacher, because it includes real star charts. But when they go to an observatory on a class trip, and open the game near a radio telescope, they get more than they bargained for: REAL aliens. One is sweet and kind; the other . . . not so much. Can Bex and Charlie capture the bad ET before it destroys their town?

Thank you, Kim, for stopping by Unleashing Readers!

Everyone, make sure to check back on August 30th for Kellee’s review of the Gamer Squad’s first book!

1 thought on “Interview with Kim Harrington, Author of the Gamer Squad Series”