“Stepping Back Into History: From 9/11 to the Cuban Crisis in the Second World War”

Today is the fifteenth anniversary of September 11, one of the most horrific days in the history of the United States.

Where were YOU that morning?

What were YOU doing when the planes hit the towers? Or the Pentagon? Or that field in Pennsylvania?

Those of us who can answer those questions likely do so with a catch in our throats and a twist in our guts. It’s hard to view events of intense personal significance as “history”, but that’s exactly what they are for our young learners.

Middle grade students are too young to have direct memories of this day as a lived experience, and yet it shaped the world in which they live.

Donalyn Miller wrote a sensitive and insightful post about using picture books, novels, and nonfiction titles to provide young readers with visceral experiences that can make history come alive and lend some context to their current reality. If you missed her post on Nerdy Book Club on August 21, take the time to read it, please.

Nonfiction and academic texts convey facts, but picture books and historical novels can serve as portals to the past, time machines that allow young people to step into a virtual/personal experience of events beyond their lives.

Established readers respond eagerly when picture books are read aloud, and the right book can provide an intense shared experience to launch further readings, even with difficult topics. Then literature groups can choose from a range of well-written historical novels, providing young learners with a deeper and wider world-view.

Such visceral engagement through books can transform history from dry facts into recognition of ourselves in other people’s lives and loves and longings. As Ricki noted in her August 11 review of The Memory of Things, by Gae Polisner, these are books “about being human.”

Books offer similar connection and impact even when the past is more distant. Events from history move beyond campaign rants or score-keeping video games when books create a virtually-lived memory.

During the current political campaign the phrase “finger on the button” as been used in discussing both presidential candidates’ suitability for office. Reading Gayle Rosengren’s Cold War on Maplewood Street allows readers to experience the minute-to-minute-terrifying threat of an all out nuclear war through the eyes of a young girl and her family. Today’s uncertainties may center on potential terrorist threats, but the internal processing of those equally real anxieties surrounding the Cuban Missile Crisis are similar.

One Thousand Tracings: Healing the Wounds of World War II, written and illustrated by Lita Judge, is a post-war story based on real events. It depicts a young American girl whose family worked to provide shoes for survivors and displaced persons in Europe when millions were facing destitute conditions. This might well spark projects by readers aimed at assisting modern refugees and displaced persons through a school-based project of some kind.

Novel study groups have many quality options but should certainly include Lois Lowry’s remarkable Number the Stars for those who have not yet read it. Its success has allowed obscure facts about brave Danes helping thousands of Jews escape to neutral Sweden to become more widely known.

The stories of the German occupation of Norway, despite its claim of neutrality, are even less well known. Snow Treasure, by Marie McSwigan, has remained in print since it released in 1942 and continues to be a popular read-aloud. Brave resistance and survival during those oppressive years in Norway are portrayed in Mary Cassanova’s The Klipfish Code and Margi Preuss’s Shadow on the Mountain.

After writing Odin’s Promise (2014), which is set in Norway during the first year of the long German occupation, I began hearing from readers who all but demanded a sequel to learn what happened to Mari and her family during the ensuing years until the war ended.

That’s exactly what historical fiction is meant to accomplish. Readers far removed from that time and place became invested in the history and the fictional characters. Even though it was written as a stand alone title, I had no choice but to dive back into research, interview people who had lived through those times, and explore what would be in store for Mari, her family, and her village. Their journey spanned four more years, so their stories became a trilogy.

And now book two, Bjorn’s Gift will release on October 5. In the second and third year of the occupation Mari confronts greater challenges and threats, many from escalating war but some from her own internal struggles. She faces timeless questions about why friends change, who can be trusted, and how to make choices when right and wrong no longer feel as clear cut as they have been in the past.

Whether it comes to recent events or ancient history, picture books and novel studies invite us to walk through open doorways to the past, allowing readers to view their own questions and experiences through the eyes of other times, places, and points of view. They remind us, as Ricki said, that we’re all human. 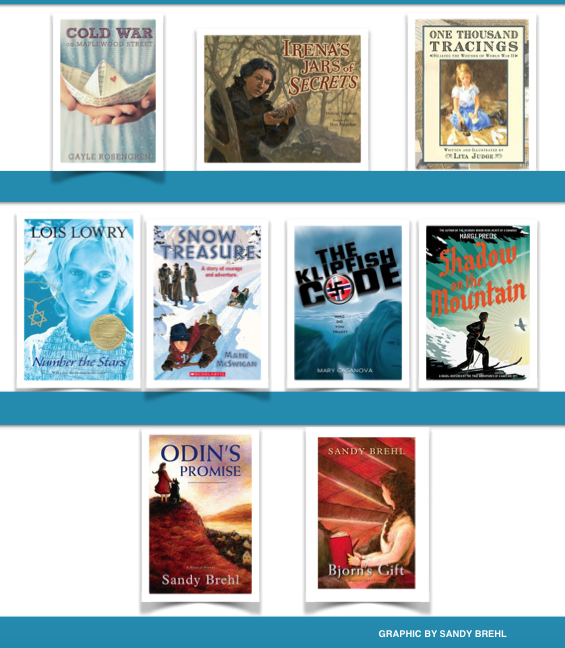 One Thousand Tracings by Lita Judge

Number the Stars by Lois Lowry

The Klipfish Code by Mary Casanova

Shadow on the Mountain by Margi Preuss

About the Author: Sandy Brehl is a retired educator and active member of SCBWI (Society of Children’s Book Writers and Illustrators). When she’s not reading and writing, she enjoys gardening. She lives in the Milwaukee area and invites you to visit her website (www.SandyBrehl.com) to learn more about ODIN’S PROMISE and BJORN’S GIFT. Sign up for quarterly newsletters to stay informed about future releases (including MARI’S HOPE), and special events and offers. Twitter: @SandyBrehl, https://www.facebook.com/sandy.brehl

Also blogs about picture books at http://UnpackingPictureBookPower.blogspot.com and @PBWorkshop on Twitter 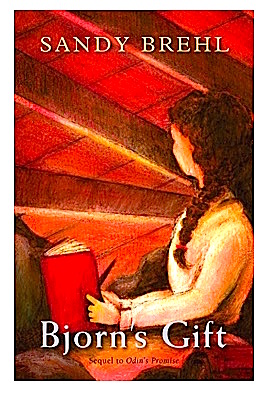 About the Book: Bjorn’s Gift is the second book in the Odin’s Promise middle-grade historical novel trilogy set in Norway during World War II.

In Bjorn’s Gift, young teen Mari faces growing hardships and dangers in her small village in a western fjord during the second and third years of German occupation, as German troops and local Nazi supporters move closer into her family’s daily life, and her classmate Leif becomes active in the Norwegian Nazi youth party.

Mari struggles to live up to her brother Bjorn’s faith in her as she becomes more involved in risky resistance activities, trusting only her family and a few close friends.

Across Norway, oppressive laws are imposed in the months from Fall 1941 to early 1943, with dire local consequences.

Difficult decisions force Mari to admit that many things in life are not easily sorted into good or bad, and she is forced to wonder if Hitler will ever be defeated . . . and whether the occupation of Norway will ever end.

The series is ideal for dog lovers, for Norwegian Americans and other European-Americans whose ancestors were involved in resistance movements in World War II, and for all who enjoy reading stories about World War II history.

Bjorn’s Gift releases on October 5, 2016. Advance sales begin in September. Book three, the conclusion of the trilogy, is Mari’s Hope, scheduled to release in 2017.

Odin’s Promise, the first book in the series, was published in 2014.

Crispin Books, an imprint of Crickhollow

September 7           Review: Stephanie Lowden at golowd, a blog about teaching and books https://golowd.com

September 14        Review by Erik at This Kid Reviews Books, https://thiskidreviewsbooks.com

September 19        Review, Suzanne Warr, at Tales from the Raven, for MMGM: http://suzannewarr.com

Thank you, Sandy, for this wonderfully researched and insightful post!

1 thought on “Blog Tour and Author Guest Post!: “Stepping Back Into History: From 9/11 to the Cuban Crisis in the Second World War” by Sandy Brehl, Author of Bjorn’s Gift”