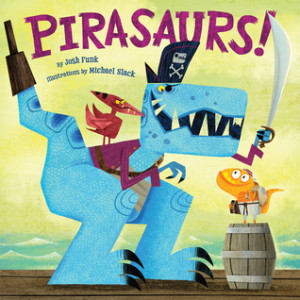 It’s no secret that we are huge fans of author Josh Funk. We are incredibly excited for the release of his book, Pirasaurs!. With Michael H. Slack as the illustrator, this is bound to be a favorite of ours. We are particularly excited about what this book will mean for our sons. The combination of pirates and dinosaurs just might make Henry’s and Trent’s heads explode!

We are honored to have been selected to feature an exclusive (1 of 5!) Pirasaurs! animated gif as part of the Pirasaurs Attack Preview “tour”, and we are sharing it with you!:

Doesn’t he look pleased? Let’s take a look at the book summary again, as we eagerly anticipate its arrival on August 30 (Orchard Books):

Meet the Pirasaurs, a ragtag team of seasoned pirate dinosaurs looking for adventure and treasure! There’s fearsome Captain Rex, golden-toothed Velocimate, one-eyed Bronto Beard, and more fearsome, buccaneering beasts….as well as one new recruit who may be small, but who’s eager to prove he can learn the ropes and find his place on the team.

But when a trap is set upon the Pirasaurs while looking for buried treasure, it’s up to the littlest recruit to show the team that there’s more to a Pirasaur than meets the eye patch!

We can’t wait to get our hands on copies of this book. It is going to be a classroom and family favorite!

… and will be available on August 30th wherever books are sold!”

(Feel free to use this image as a profile pic in anticipation of Pirasaur’s release!)