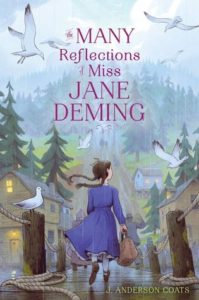 Summary: High-spirited young Jane is excited to be part of Mr. Mercer’s plan to bring Civil War widows and orphans to Washington Territory—but life out west isn’t at all what she expected.

Washington Territory is just the place for men of broad mind and sturdy constitution—and girls too, Jane figures, or Mr. Mercer wouldn’t have allowed her to come on his expedition to bring unmarried girls and Civil War widows out west.

Jane’s constitution is sturdy enough. She’s been taking care of her baby brother ever since Papa was killed in the war and her young stepmother had to start working long days at the mill. The problem, she fears, is her mind. It might not be suitably broad because she had to leave school to take care of little Jer. Still, a new life awaits in Washington Territory, and Jane plans to make the best of it.

Except Seattle doesn’t turn out to be quite as advertised. In this rough-and-tumble frontier town, Jane is going to need every bit of that broad mind and sturdy constitution—not to mention a good sense of humor and a stubborn streak a mile wide.

Review: I didn’t know much about the Washington Territory. I knew that it had to have been settled quite like Oregon (I’m the Oregon Trail generation!) or California, but I didn’t know about the boat expeditions, or any expeditions for that matter, to the territory. It was fascinating to read about Jane’s trip to Washington as well as the complicated family that she traveled with. Jane’s story is not only a look at the history of America and Washington State, it is also a story of the perception about the role of woman in towns and families. Ms. D, in Jane’s story, is such an interesting character. She, as a very young uneducated woman, married Jane’s father who died in the Civil War. Now she is still young and pretty but has a preteen stepdaughter and a toddler son, both things that make you less of an attractive new wife. Jane also has us look at the idea of woman on the frontier because she learns to step outside of the roles her stepmother wants her to have and expand into a well-rounded frontier girl.

Teachers’ Tools for Navigation: One thing I found disappointing was the lack of back matter in the book though I think this may be where the best classroom opportunity comes from. I assume that most young readers won’t know this time period and the west before it was America, so the reader themselves could use Jane’s story to jump start an inquiry look into the Washington Territory, the expeditions there (were they all in boats?!), and how life was different there than in the east.

Discussion Questions: How does Jane break the female mold in this story?; Why isn’t Ms. D as eligible as a wife as the other girls?; Why do Jane’s friends and Jane part ways a bit once they get to Washington?; Why is Jane’s paper book so important to her?; How did Mr. Mercer use propaganda to get young girls on his boat and also to get men in Washington to help pay for the expedition?; Did Miss Gower need Jane’s help or did she have another motive?

Flagged Passages: “It will need to be grand if it’s to fit the seven hundred unmarried girls and war widows Mr. Mercer plans to bring out west to teach in the schools of Washington Territory or to turn their hands to other useful employment.

Or, if you are Mrs. D, marry one of the many prosperous gentlemen bachelors pining for quality female society.

She’s pinned all her hopes on it. Mrs. D hated working in the Lowell mills. She hated leaving her kitchen and hearth and standing for fourteen hours a day before a loom, sneezing from all the dust and lint and not being able to sleep at night because of the ringing in her ears. She wants to be a wife again, to have someone else go out to work while she keeps house. If she has to go all the way to Washington Territory to do it, by golly, that’s what she’ll do.

After Mrs. D paid our passage, Mr. Mercer gave her a copy of a pamphlet he wrote about the advantages and charms of Washington Territory. She glanced at it once, rolled her eyes, then left it on her chair in teh dining room. I snatched it up and hid it in my secret carpetbag, and when she’s not around, I read it.

I’ve read every word hundreds of times. Even the big words I must puzzle over. Even the boring chapters on Lumber and Trade.” (p. 5-6)

Read This If You Loved: The Oregon Trail, The True Confessions of Charlotte Doyle by Avi, The Very Nearly Honorable Society series by Caroline Carlson, The Chronicles of the Black Tulip series by Barry Wolverton, Rory’s Promise by Michaela MacColl, Hattie series by Kirby Larson, May Amelia series by Jennifer L. Holm