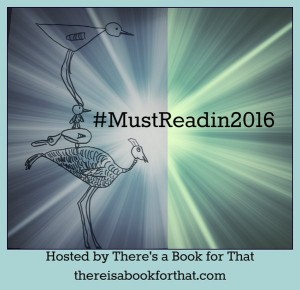 #MustReadIn2016 is hosted by Carrie Gelson at There Is A Book For That:

“For anyone out there with a To Be Read list that seems like it will never end, this challenge is for you! This is all about making your own personal list of books (5? 10? 20? 30? more?) that you commit to reading in 2016. Books can be published in any year, be from any genre, and be from any category (adult, YA, MG, Graphics, NF, etc.).  As your TBR list grows, you promise you will get to the books on this list.” 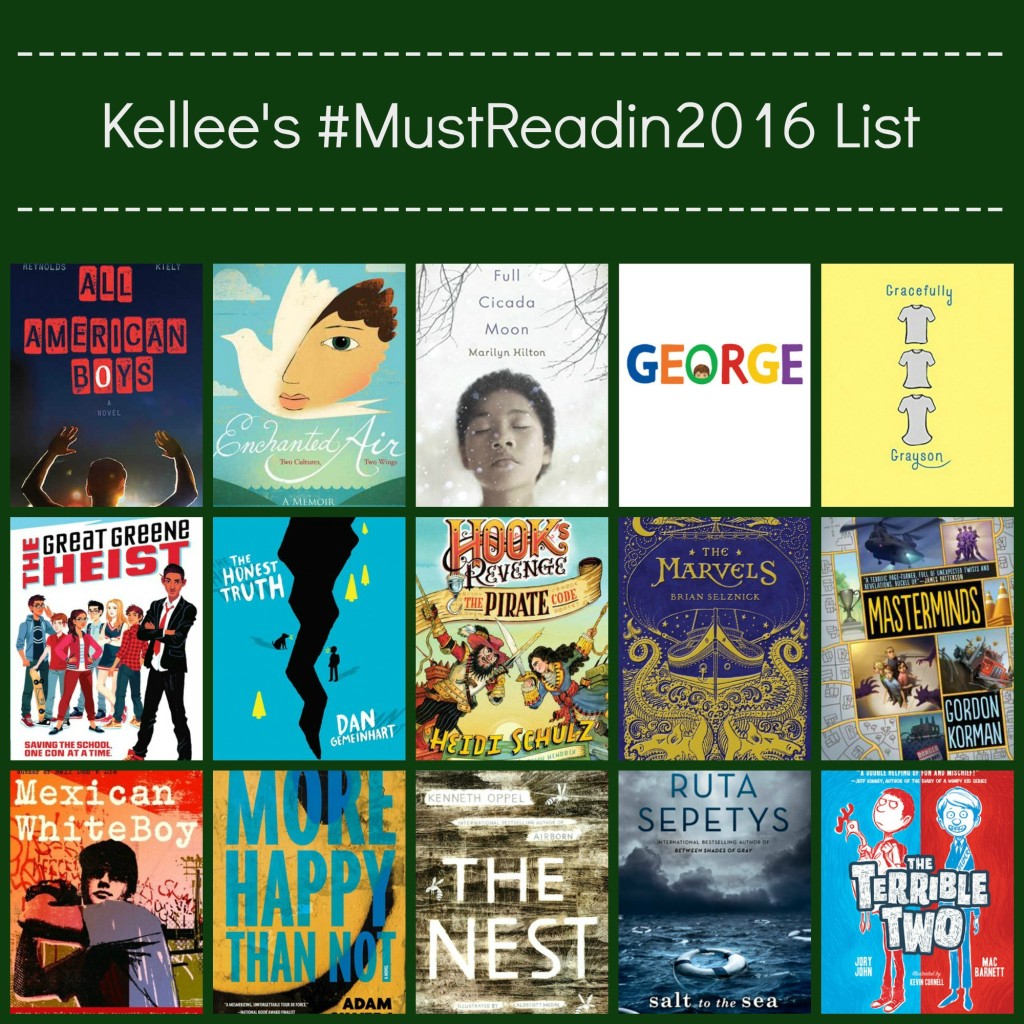 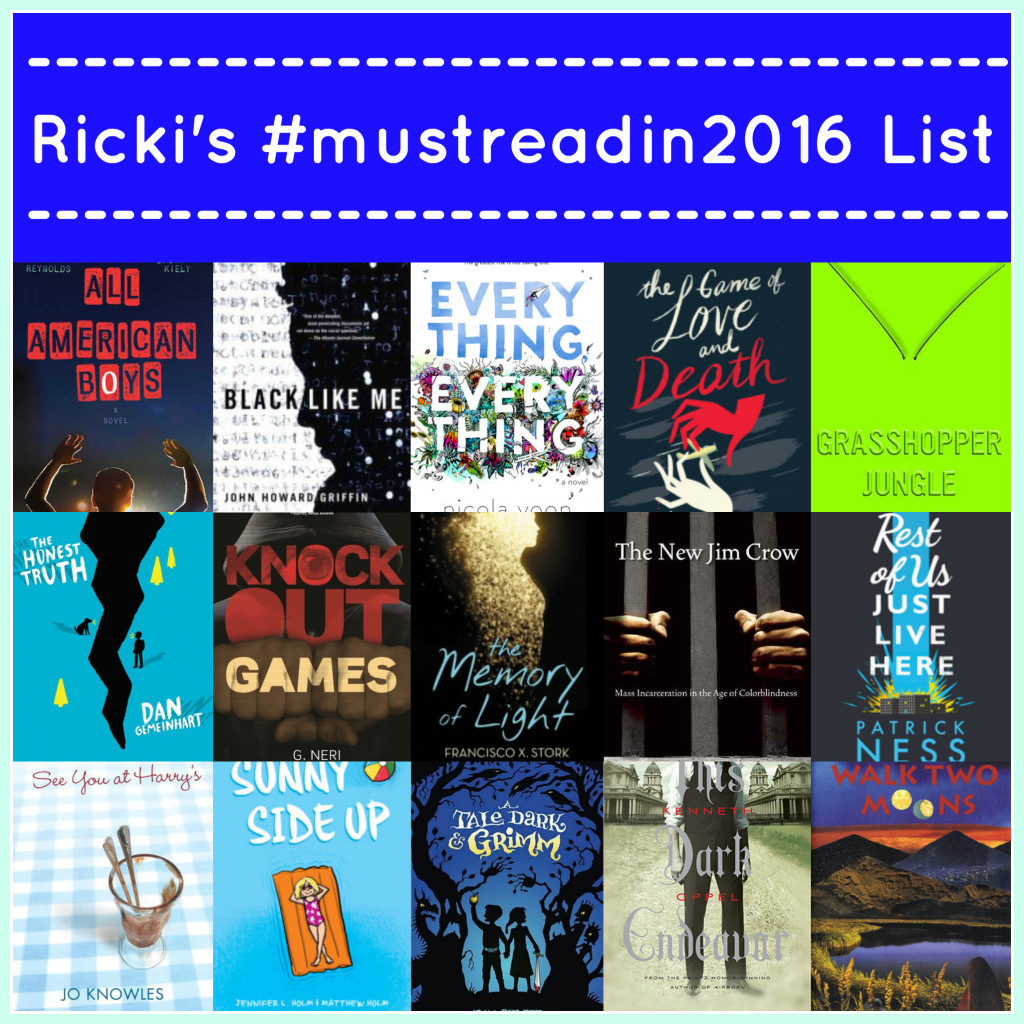 My plan was to read 5 books between each update, and I am right on track! 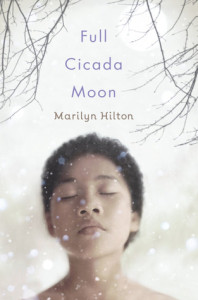 Goodreads Summary: It’s 1969, and the Apollo 11 mission is getting ready to go to the moon. But for half-black, half-Japanese Mimi, moving to a predominantly white Vermont town is enough to make her feel alien. Suddenly, Mimi’s appearance is all anyone notices. She struggles to fit in with her classmates, even as she fights for her right to stand out by entering science competitions and joining Shop Class instead of Home Ec. And even though teachers and neighbors balk at her mixed-race family and her refusals to conform, Mimi’s dreams of becoming an astronaut never fade—no matter how many times she’s told no.

This historical middle-grade novel is told in poems from Mimi’s perspective over the course of one year in her new town, and shows readers that positive change can start with just one person speaking up.

My Thoughts: I am so glad Carrie told me to read this book! She is definitely learning the types of books I love! What makes Full Cicada Moon special is Mimi’s voice. Mimi is strong in the face of adversity and not willing to stand down vs. those who believe she should be less of what she is because she is different. She is who I want my students to read about because although the novel is historical, the themes within are not. 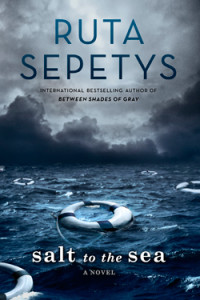 Each one born of a different homeland; each one hunted, and haunted, by tragedy, lies…and war.

As thousands of desperate refugees flock to the coast in the midst of a Soviet advance, four paths converge, vying for passage aboard the Wilhelm Gustloff, a ship that promises safety and freedom.

Yet not all promises can be kept.

Inspired by the single greatest tragedy in maritime history, bestselling and award-winning author Ruta Sepetys (Between Shades of Gray) lifts the veil on a shockingly little-known casualty of World War II. An illuminating and life-affirming tale of heart and hope.

My Thoughts: Sepetys is a genius. She gives voices to those who had not had voices in historical fiction yet. Her ability to humanize those involved through fictional characters while staying true to the tremendous amount research she does just blows me away. I also was so excited to find out that Salt was a companion to Shades. Ricki did a wonderful job of reviewing Salt to the Sea. 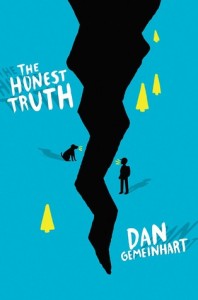 Goodreads Summary: In all the ways that matter, Mark is a normal kid. He’s got a dog named Beau and a best friend, Jessie. He likes to take photos and write haiku poems in his notebook. He dreams of climbing a mountain one day.

So Mark runs away. He leaves home with his camera, his notebook, his dog, and a plan to reach the top of Mount Rainier–even if it’s the last thing he ever does.

The Honest Truth is a rare and extraordinary novel about big questions, small moments, and the incredible journey of the human spirit.

My Thoughts: I’m so glad I chose this book as our first teacher book club choice. There are few reasons why I loved this book despite the depressing tone and topic: First, Mark’s haiku poems written throughout the book are beautiful and I loved reading them in order once the book was over. Second, I love the part the photography played in the story. It shows how powerful images are. Third, I loved the two points of view because, although I loved Mark’s voice, that allowed us to know the feelings at home. Fourth, I loved how Gemeinhart used personification to make the setting another character within the story. Finally, I was intrigued how he had Mark go through the grieving process for himself throughout the story. So well done. 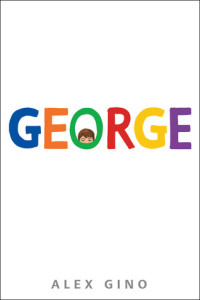 George thinks she’ll have to keep this a secret forever. Then her teacher announces that their class play is going to be Charlotte’s Web. George really, really, REALLY wants to play Charlotte. But the teacher says she can’t even try out for the part . . . because she’s a boy.

With the help of her best friend, Kelly, George comes up with a plan. Not just so she can be Charlotte — but so everyone can know who she is, once and for all.

My Thoughts: I was so proud to hear about this book being published! It is so important that the existence of transgender individuals becomes a reality to everyone, including children. I was wondering how it would be written to not be didactic or over a young child’s head, and I was so impressed. The story was done so gently and thoughtfully. Right away the pronoun she/her was used for George allowing the reader to know right away that George was female; she just needed to tell others. The way Alex Gino told the story will make it so every reader will understand George’s story. This is a book that is going to help with compassion and understanding within our LBGT community. 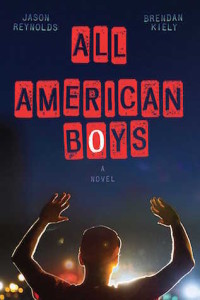 That’s the sidewalk graffiti that started it all…

Well, no, actually, a lady tripping over Rashad at the store, making him drop a bag of chips, was what started it all. Because it didn’t matter what Rashad said next—that it was an accident, that he wasn’t stealing—the cop just kept pounding him. Over and over, pummeling him into the pavement. So then Rashad, an ROTC kid with mad art skills, was absent again…and again…stuck in a hospital room. Why? Because it looked like he was stealing. And he was a black kid in baggy clothes. So he must have been stealing.

And that’s how it started.

And that’s what Quinn, a white kid, saw. He saw his best friend’s older brother beating the daylights out of a classmate. At first Quinn doesn’t tell a soul…He’s not even sure he understands it. And does it matter? The whole thing was caught on camera, anyway. But when the school—and nation—start to divide on what happens, blame spreads like wildfire fed by ugly words like “racism” and “police brutality.” Quinn realizes he’s got to understand it, because, bystander or not, he’s a part of history. He just has to figure out what side of history that will be.

Rashad and Quinn—one black, one white, both American—face the unspeakable truth that racism and prejudice didn’t die after the civil rights movement. There’s a future at stake, a future where no one else will have to be absent because of police brutality. They just have to risk everything to change the world.

Cuz that’s how it can end.

My Thoughts: This is a book everyone should read. I know you have probably read that about this book, but I am saying it again. Rashad’s story allows the reader to be part of an event like we see on the news and truly understand what is going on. It is insightful, thoughtful, sad, powerful, and important. I’m so excited to have this as my second teacher book club book; we meet this afternoon to chat about it!

I read three books on my #mustreadin2016 list. I usually get many more books read during the summer, so I am excited for that to start! 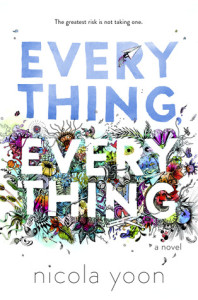 Goodreads Summary: My disease is as rare as it is famous. Basically, I’m allergic to the world. I don’t leave my house, have not left my house in seventeen years. The only people I ever see are my mom and my nurse, Carla.

But then one day, a moving truck arrives next door. I look out my window, and I see him. He’s tall, lean and wearing all black—black T-shirt, black jeans, black sneakers, and a black knit cap that covers his hair completely. He catches me looking and stares at me. I stare right back. His name is Olly.

My Thoughts: I read this book several months ago, and the story still remains at the forefront of my mind. I absolutely loved the character development within this book. The author is very talented, and I could not put the book down because I was so excited to learn what happened next. This book is different from many others, and it is a great go-to recommendation for teachers. 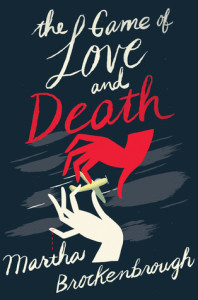 Goodreads Summary: Antony and Cleopatra. Helen of Troy and Paris. Romeo and Juliet. And now… Henry and Flora.

For centuries Love and Death have chosen their players. They have set the rules, rolled the dice, and kept close, ready to influence, angling for supremacy. And Death has always won. Always.

Could there ever be one time, one place, one pair whose love would truly tip the balance?

Meet Flora Saudade, an African-American girl who dreams of becoming the next Amelia Earhart by day and sings in the smoky jazz clubs of Seattle by night. Meet Henry Bishop, born a few blocks and a million worlds away, a white boy with his future assured—a wealthy adoptive family in the midst of the Great Depression, a college scholarship, and all the opportunities in the world seemingly available to him.

The players have been chosen. The dice have been rolled. But when human beings make moves of their own, what happens next is anyone’s guess.

Achingly romantic and brilliantly imagined, The Game of Love and Death is a love story you will never forget.

My Thoughts: This is such a smart, smart book. I absolutely loved how Martha Brockenbrough weaved mythology and history into the book. I selected this book for my book club, and everyone absolutely loved it. This is the first time this has happened, I think! There was so much to discuss, and we had fun analyzing the characters–their motivations and decisions. One of the women in my book club said, “I have never wanted to step into a story more often than this one. I really cared about the characters!” 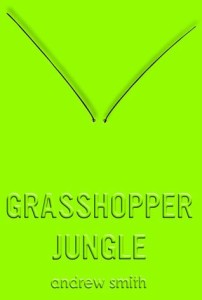 Goodreads Summary: Sixteen-year-old Austin Szerba interweaves the story of his Polish legacy with the story of how he and his best friend , Robby, brought about the end of humanity and the rise of an army of unstoppable, six-foot tall praying mantises in small-town Iowa.

To make matters worse, Austin’s hormones are totally oblivious; they don’t care that the world is in utter chaos: Austin is in love with his girlfriend, Shann, but remains confused about his sexual orientation. He’s stewing in a self-professed constant state of maximum horniness, directed at both Robby and Shann. Ultimately, it’s up to Austin to save the world and propagate the species in this sci-fright journey of survival, sex, and the complex realities of the human condition.

My Thoughts: This book has been on my Must Read list for two years. I love Andrew Smith and appreciate everything he writes. I am a bit of a prude, so I should be honest that I felt a little uncomfortable in a few sections of this book. That all said, I know that teenagers, in general are not nearly as prudish as me. I’ve recommended this book to many teens, and I think it belongs in every classroom. It is very funny and quite clever. Is it a book that was written for me? No, but this doesn’t matter, does it? This is a quality book that will turn so many kids onto reading.

Stop by There Is A Book For That to see the updates of everyone’s #mustreadin2016 lists!