Goodreads Summary: Matt Tavares hits one out of the park with this powerful tale of a kid from the segregated south who would become baseball’s home-run king.

Before he was Hammerin’ Hank, Henry Aaron was a young boy grow ing up in Mobile, Alabama, with what seemed like a foolhardy dream: to be a big-league baseball player. He didn’t have a bat. He didn’t have a ball. And there wasn’t a single black ball player in the major leagues. B ut none of this could stop Henry Aaron. In a captivating biography of Henr y Aaron’s young life – from his sandlot days through his time in the Negro Leagues to the day he played his first spring training game for the Braves – Matt Tavares offers an inspiring homage to one of baseball’s all-time greats.

Goodreads Summary: A lively picture book biography of Ted Williams from a master of the genre — just in time for Fenway Park’s centennial.

Ted Williams lived a life of dedication and passion. He was an ordinary kid who wanted one thing: to hit a baseball better than anyone else. So he practiced his swing every chance he got. He did fingertip push-ups. He ate a lot of food. He practiced his swing again. And then practiced it some more. From his days playing ball in North Park as a kid to his unmatched .406 season in 1941 to his heroic tours of duty as a fighter pilot in World War II and Korea, the story of Teddy Ballgame is the story of an American hero. In this engrossing biography, a companion to Henry Aaron’s Dream, Matt Tavares makes Ted Williams’s life story accessible to a whole new generation of fans who are sure to admire the hard work, sacrifice, and triumph of the greatest hitter who ever lived.

Goodreads Summary: Matt Tavares’s striking homage to one of baseball’s legends offers a rare view into Babe Ruth’s formative years in “the House that built Ruth.”

Before he is known as the Babe, George Herman Ruth is just a boy who lives in Baltimore and gets into a lot of trouble. But when he turns seven, his father brings him to the gates of Saint Mary’s Industrial School for Boys, and his life is changed forever. At Saint Mary’s, he’s expected to study hard and follow a lot of rules. But there is one good thing about Saint Mary’s: almost every day, George gets to play baseball. Here, under the watchful eye of Brother Matthias, George evolves as a player and as a man, and when he sets off into the wild world of big-league baseball, the school, the boys, and Brother Matthias are never far from his heart. With vivid illustrations and clear affection for his subject, Matt Tavares sheds light on an icon who learned early that life is what you make of it — and sends home a message about honoring the place from which you came.

Growing Up Pedro: How the Martinez Brothers Made it From the Dominican Republic All Way to the Major Leagues
Author: Matt Tavares
Published February 10th, 2015

Goodreads Summary: The love between brothers is key to Matt Tavares’s tale of Dominican pitcher Pedro Martinez, from his days of throwing rocks at mangoes to his years as a major-league star.

Before Pedro Martinez pitched the Red Sox to a World Series championship, before he was named to the All-Star team eight times, before he won the Cy Young three times, he was a kid from a place called Manoguayabo in the Dominican Republic. Pedro loved baseball more than anything, and his older brother Ramon was the best pitcher he’d ever seen. He’d dream of the day he and his brother could play together in the major leagues—and here, Matt Tavares tells the story of how that dream came true. In a fitting homage to a modern day baseball star, the acclaimed author-illustrator examines both Pedro Martinez’s improbable rise to the top of his game and the power that comes from the deep bond between brothers.

My Review: These four superbly crafted biographies take a look at the life of each man, but as more than a baseball player. We learn about their childhoods, where they came from, and their dreams and hopes. Each book includes aspects of the history surrounding them including the Depression, wars, and racism. Additionally, these books are crafted beautiful with lyrically written prose. These books are must reads for lovers of baseball, history, and biographies in general.

Teachers’ Tools for Navigation: I was lucky enough to be asked to write a teachers’ guide for each of these books. For each book, I created discussion questions and activities (including cross-curricular activities). I plan on using this guide in my own classroom with the books in a lit circle type of setting. Each group will be given one of the biographies, will complete the discussion questions and activities, and then become experts on their player before presenting. These biographies are asking to be in classrooms, and I hope the guide helps show how they can fit into a language arts/reading class.

Examples from the guide:

Becoming Babe Ruth
News spread differently in the early twentieth century. Discuss with your students the way news about Babe Ruth was spread during his lifetime and have students find examples in the text. Then have them discuss the way news is spread digitally nowadays. Invite the class to debate the pros and cons of digital news.; How did Babe Ruth’s life change when he left Saint Mary’s to play for the Orioles?

Henry Aaron’s Dream
Baseball began integrating before all cities in the United States had ended segregation. As a class, discuss how this reality affected black players on major-league baseball teams and how black players’ trips to segregated cities differed from those of their white teammates. Then, with your students, complete a graphic organizer comparing and contrasting the life of white and black baseball players during Hank Aaron’s lifetime. Invite students to write an essay about how life has changed for players of color over time.; How did Jackie Robinson influence Henry Aaron? What did Jackie Robinson’s accomplishments mean for other black baseball players?

Growing Up Pedro
Pull up a map of North America. Have students mark all the different places that Pedro played: the Dominican Republic, Montana, Montreal, and so on. Ask students to determine the miles between each location. Which place was the farthest from Pedro’s home? Which place was the closest?; Have students write a journal entry as Pedro Martínez. Invite them to write, from Pedro’s point of view, what it feels like to move so far away from home when he is so young. Does he miss his family? Is he sad, happy, or excited to be in Montana.

Discussion Questions: Examples of discussion questions and activities for each of the biographies can be found in my teachers’ guide; however, after reading all four of the books, two discussion questions could be: Most of the baseball players had a mentor or idol that he looked up to and learned from. How did these mentors or idols help guide the players into becoming the greats they are?; Each of the baseball players helped a charity that was close to his heart. Who did each player help? Why did players choose the charity they did? 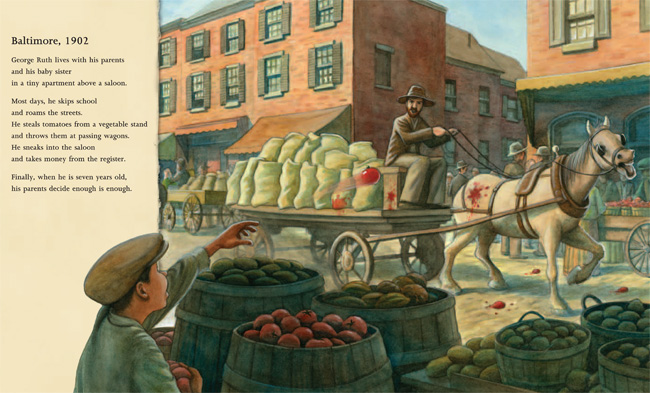 Check out Matt Tavares’s You Tube channel to see sneak peeks into Growing Up Pedro and  There Goes Ted Williams.